I’ve always loved the idea of sensory play…you know on a non-carpeted floor & preferably not in my own home: Benjamin being able to explore messiness to his heart’s content. I know it provides such wonderful experiences for babies & I’ve tried to create some sensory activities of my own. So imagine my delight when I realised that there are actual, dedicated classes for sensory development! Perfect. I signed Benjamin up as soon as I was able, did a sharp intake of breath when I paid for said classes, but was secretly excited for the boy & hoped it would give me more inspiration for home.

We’ve been going for two months now & I’ve got to say, these have been the most surreal eight weeks of my life & probably Benjamin’s too. We have had the standard bubbles, parachute, balloons & scarves, but sometimes I find myself ‘looking in’ on the situation, thinking ‘what on earth am I doing?’ For example, we were sat at a ‘Teddy Bears’ Picnic’ with plastic teacups, plates & food. Never would I have thought, that at aged 5 months, I’d be encouraging my son to feed his teddy a fake chilli pepper, while humming along to “If You go Down to The Woods Today” & drinking a cup of pretend tea: it’s not like he does this for himself yet. And would this really be his snack of choice whilst on a picnic? Last week, we were given beautiful rainbow Pride flag each & some multi-coloured ribbons on a stick to wave; whilst the babies were placed on a large air mattress covered in luminous fabric, listening to the UK’s 2007 Eurovision entry “Flying The Flag” by Scooch. Benjamin was not impressed; well it’s no “Dr. Jones” by Aqua is it? Anyway, we’ll carry on until Christmas & just hope that it’s having a positive effect on his senses. Well, where else can you chill out on a 70s sheepskin rug, chewing a monkey puppet, holding hands with your best mate, listening to the dulcet tones of Lionel Ritchie on a wet/windy November afternoon?!

This week brought another surreal situation, in the form of a ceramic café. It was a special, pre-Christmas baby event: decorating your own bauble or plate. After our previous home experiences of painting Benjamin’s hands & feet, I was already a little anxious about the whole thing. Last time, as mentioned on Facebook, we were all traumatised & he ended up looking like a diluted Smurf for a good few days afterwards. Anyway, I decided that his friend Albert should go first & we’d watch in preparation; just so the boy would know what to expect. He watched patiently, Albert did as he was asked perfectly & Benjamin giggled at seeing his friend being coated in brown & green paint. Then it was his turn. He didn’t want to play ball particularly. Yes he fluttered his ultra long eyelashes at the lovely ceramicist, he smiled & charmed; all in his usual way, but he was definitely not going to put his foot flat on the plate. It took a few attempts & the lady even washed down the plate, as it resembled more of a messy Brussels sprout than a ‘foot sleigh’. Eventually we got there though. The boys wanted lots of praise for their hard work – it’s such an exhausting task having someone do this for you don’t you know! And then they cried: Benjamin more loudly than Albert. Whilst he was squawking, the very patient lady went on to discuss the other products available & enthusiastically told us about their new ‘Bottom Print Snowman Plate’! (Which I’m hoping was just for the baby event?!) I kid you not. I didn’t even think this was a thing, apart from the fabled photocopying of your bum at an office party (& no I have never done this just for the record!) I couldn’t even imagine the process of trying to capture Benjamin’s derrière, let alone serving food from it. “Great Grandad, do have a delicious mince pie, don’t mind the interesting brown scarf & yellow snow, Benjamin created it all by himself!” Hmmm, yummy. Needless to say, we politely declined.

Overall, it has been a great week for firsts: He has stayed sat up, hands free, all by himself. I’m sure it was to try & impress his girlfriend Amelia, but whatever the incentive, we’re proud of him. He also sat at the table in his highchair, opposite his big sister Chloe whom he adores, watching us all eat our dinner. Although he didn’t join us for the homemade macaroni cheese, I’m sure it won’t be long. And right now, whilst I type, he’s having his first proper tantrum, all because I took his beloved helicopter out of his mouth while he was sleeping. I’m such a mean Mumma! Thank you for reading 🙂 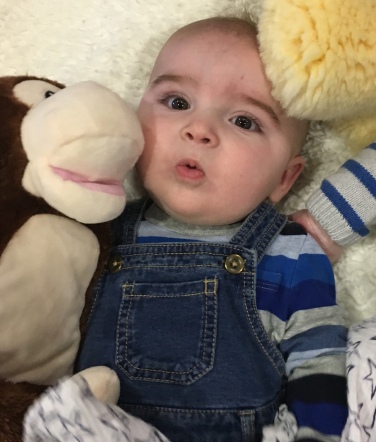 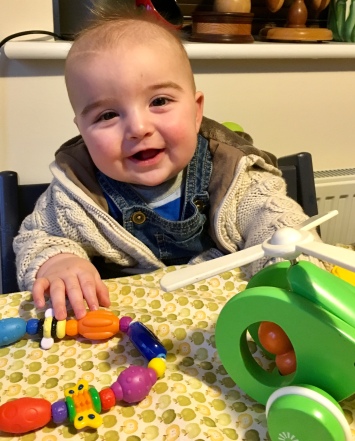 Sitting up at the table for the first time! 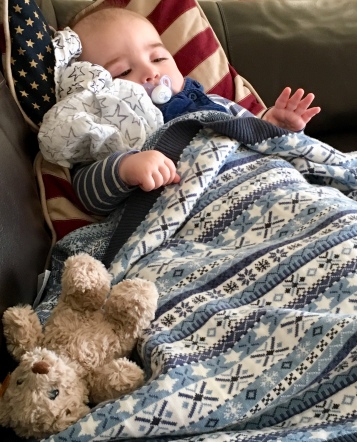 All calm after the first tantrum!

I'm just a regular Mumma, blogging my adventures in late motherhood with my little family... View all posts by thegeriatricmumma