This was the blog that I wanted to post on Tuesday, but things got a little crazy in the Greenhouse, so here we are, a little later than planned…

I want to talk about last Monday, when for the first time since our initial visit back in August, our wonderful osteopath Mark signed Benjamin off; satisfied for us not to return, unless we were still overly concerned ourselves & really wanted to cross his palm with the best part of £40.00 again, for half an hour of his incredibly precious time. He thinks he could do a little more: if we wanted Benjamin to be completely fine-tuned, but for the most part, he was happy & that makes us happy.

In a nutshell (excuse the pun), Benjamin has a ‘wonky bonce’ as Tim so eloquently puts it, or plagiocephaly if you want to be really technical. Basically he has a slightly flat spot on his right side, all because he suffered with torticollis (or ‘twisted neck’) since birth. The abrupt nature of his arrival (right at the end) was a little overwhelming for Benjamin (including his Mumma!) So much so, that he kind of froze in shock because he’d been evicted so forcefully, but very necessarily! After much research, aka late-night Googling, I’ve found that both conditions are becoming increasingly more common in babies. Plagiocephaly in particular since the Back To Sleep Campaign started in 1994. It is obviously desperately important to ensure that babies are safe while they sleep & I am 100% in favour of any advice I can get regarding best sleeping positions. However, no information about these conditions is made available to expectant parents. I wish we’d been told about torticollis/plagiocephaly in Antenatal classes. Learning how to breastfeed is well & good, but it shouldn’t be the main focus. Things like: signs to look out for regarding head movement & shaping, when to worry, things to try in the first instance & even contact details of amazing professionals like ‘our’ Mark should also be included. We were recommended to Mark by one of my amazing Mummy Friends, yep, I’ve used that expression, the one I really hate. This was after I was hitting my own head repeatedly against a brick wall with the Health Visitors, who weren’t taking my concerns about Benjamin’s lack of neck movement seriously. In my experience, they have been next to useless with all of my concerns. Being told, “it’s normal, just put all your baby’s toys on the left side so he’s forced to move his neck, or turn him the opposite end of his cot” multiple times doesn’t treat the problem itself. The poor boy was literally ‘locked’ into this position, so all of these suggestions were of no use at all. As far as Benjamin was concerned, only half the world existed & he literally couldn’t investigate to find the other half: because his neck forced him to always look to his right.

Tim & I arrived at a fairly modest private residence in Dorchester in late August last year, not entirely sure what to expect. My friend had said, he’ll just talk to you & Benjamin & you won’t even realise he’s doing anything. And that’s exactly how it went. Every visit. Yes, he examined him, he held him in fairly standard treatment positions, but what he was actually doing was invisible to the untrained eye. He is such an interesting man, with a mass of curly grey hair, earrings & an incredibly dry sense of humour, which I appreciate. Benjamin was absolutely intrigued by him from the start. Although you’re never quite sure if he is joking or not; for example, in one of our sessions, he flew Benjamin around the room steadily supporting his tummy & back, they were both chatting away to each other as always. I was convinced that I’d witnessed some really technical pediatric osteopathic move & intrigued, I asked what treatment he was doing. He just laughed & said, “well you’ve got to keep it fun with children, can’t be serious all the time!” Of course. Silly me. As the weeks & months went by, everyone could see a massive change in Benjamin & he now has a completely full range of neck movement. It’s amazing to see, especially considering how bad it was to begin with. His head will never be perfectly symmetrical though, but then whose is? As hard as it is to acknowledge that your child has flaws, I’ve decided that he’s perfectly imperfect & that’s more than good enough for us. We won’t send him back just yet. He’ll just have to have a long mane of hair instead. We enquired about the recently celebrity-famed ‘helmets’, but the poor boy would have to wear it for 23 hours straight a day, they are quite restrictive, designed purely for changing aesthetics & with a starting price of £2k, we decided that he can be beautifully & naturally unique.

The best advice that he gave me was to keep Benjamin on the floor. Lots of tummy time, as much as possible in fact & let him work things out for himself. He explained that this is how all babies learn best: plenty of opportunities to explore for themselves & time to get frustrated, all without too much adult interaction or distraction & he is right. I’ve loved & continue to love watching Benjamin figure things out in his head: how to move objects, how to move towards objects & learning about pressure points, all in preparation for crawling (which isn’t far off!) Sometimes I can literally see the boy thinking. It’s magical.

With this in the back of my mind, I’ve always tried hard to keep tummy time fun & varied: to hold his attention longer than 30 seconds. This week we’ve been looking at different kinds of lids on a tray. Even though I washed each of them to within an inch of their lives, he still seems to be instinctively drawn towards the alcoholic ones! Hmmm, I can’t think where he gets that from? I also changed his sensory light bulbs from their festive contents to lots of random Playmobil accessories, colourful rainbow beads & Lego bricks. See the photographs below.

I will always maintain that osteopathy is 50% science & 50% witchcraft, but it works & that’s all we wanted & hoped for. We’ve given Benjamin the best possible start, all from chance conversation with a good friend. I’ll happily give out Mark’s contact details, just leave a comment below or drop me an email. I honestly can’t recommend him enough.

Thank you for reading. 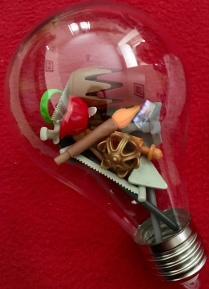 Gotta love a bit of Playmobil!

Lego…because no one wants to tread on it! 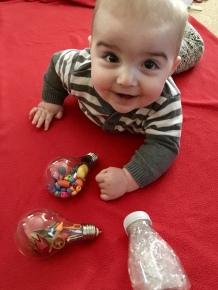 I caught you Benjamin – sniffing the corks, again!

I'm just a regular Mumma, blogging my adventures in late motherhood with my little family... View all posts by thegeriatricmumma